The price at which you buy a stock can greatly affect your overall returns. While you don’t necessarily want to wait forever for a stock to fall to a price where you think it’s cheap enough, you should also be careful when buying stocks that are trading at their highs or at excessive multiples to sales or profits. And with the Dow Jones Industrial Average trading at record highs, it’s harder than ever to find good bargains out there.

However, there are a couple of attractive stocks that are trading at relatively cheap prices right now, including Biogen (NASDAQ:BIIB) and Facebook (NASDAQ:FB). Below, I’ll take a look at what makes them bargains and why it might be worth scooping up their shares today.

Biogen is a volatile stock, mainly due to the fraught research and development journey of its Alzheimer’s drug candidate, aducanumab. In March 2019, the company said it would cancel two late-stage trials of the treatment candidate, only to announce in October 2019 that it would be reversing its plans for aducanumab. Biogen claimed that there was sufficient positive data from its earlier studies to warrant seeking official approval from the U.S. Food and Drug Administration (FDA).

That drama has continued into 2020. On Nov. 4, the FDA suggested that the candidate’s approval is likely, stating that, “the applicant has provided substantial evidence of effectiveness to support approval.” And while that was great news for investors, the bullishness wouldn’t last. Only days later, on Nov. 6, a panel that advises the FDA took a different stance, saying that there were “contrary findings” and many “red flags” relating to the trial data.

The fate of aducanumab remains uncertain, but with the stock back down after the panel’s negative response, Biogen could once again be an attractive pickup. Since the optimism surrounding aducanumab appears to be more muted, there’s not a lot of hype built into the stock price, which trades at 8.2 times earnings. That’s a bargain when you consider that the average stock in the Health Care Select Sector SPDR Fund trades at more than 23 times its earnings.

Biogen hasn’t generated much growth over the years, with sales of $14.4 billion in 2019 rising just 6.9% from the previous year. And things could get worse for the company. Sales from its multiple sclerosis drug Tecfidera could dwindle as generics hit the market. Those new generics could lead to a loss of the bulk of the $3.3 billion in revenue that the drug generated in the U.S. alone last year.

The healthcare stock is by no means a risk-free investment, and it’s facing some challenges ahead. But at its low price, the risk may be worth the potential reward, especially if the FDA approves aducanumab. While the external panel wasn’t optimistic about the company’s Alzheimer’s drug, what ultimately matters is what the agency itself has to say, which should keep investors at least a little optimistic that aducanumab may earn approval next year.

Tech giant Facebook is another stock that looks cheap today when compared to its rivals. Although it’s trading at more than 30 times revenue, investors are paying much heftier premiums for other FAANG stocks. 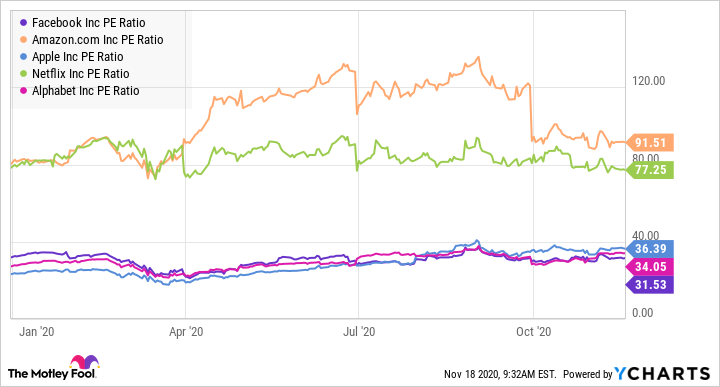 And the company has done well during the pandemic; Facebook reported revenue of $21.5 billion in its most recent quarter, which it released on Oct. 29, for the period ending Sept. 30. Sales were up 22% year over year, and for the last nine months, they grew at a rate of 17%, hitting $57.9 billion. Its year-to-date profits totaling $17.9 billion were also 61% higher than the $11.1 billion that Facebook reported during the same period last year. The popular social media site also reported that its average daily active users in September totaled 1.82 billion, which was a year-over-year increase of 12%.

Facebook is a great example of a pandemic and recession-proof stock that can do well in both good times and bad. And with a relatively cheap price compared to its rivals, this could be the optimal tech stock to add to your portfolio today. Year to date, shares of Facebook are up 35%.

Which of these stocks is the better overall bargain?

Shares of Biogen and Facebook have been headed in opposite directions this year: 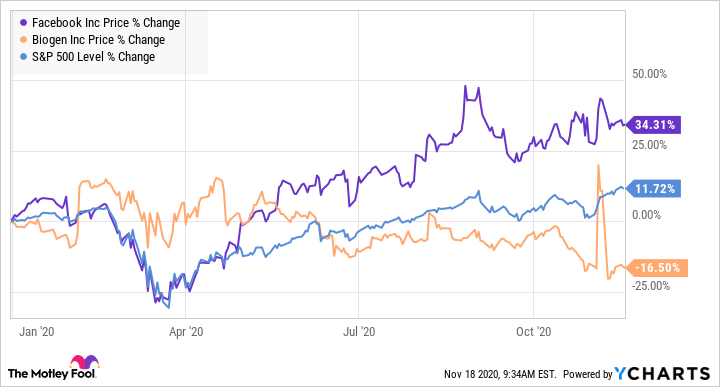 However, both of these stocks could continue rising from here on out. Which investment is optimal for you will ultimately depend on your risk profile. If you’re a risk-averse investor, you’re probably better off investing in Facebook, as there’s less uncertainty about its future than there is about Biogen and its Alzheimer’s treatment candidate. But if you’re okay with taking on more risk, it’s clear from the spike that Biogen’s stock got earlier this month that the stock may be poised for more explosive growth given its lower valuation — it just needs some positive news from the FDA.