Some of the big winners this year have been next-gen internet connectivity services. Due to the pandemic, much of the economy has moved online. Companies that allow businesses to reach consumers in fast, secure ways via digital channels have boomed.

Perhaps the biggest poster child for this phenomenon has been Fastly. Fastly is a content delivery network that allows companies to deliver their applications at lightning-quick speeds to end users. Its service is of utmost importance now that internet traffic has gone into overdrive.

Fastly has also skyrocketed 530% in 2020, and now trades at a nosebleed valuation of 54 times sales. Not earnings — sales.

The need for fast and secure internet communications is a solid long-term trend, and Fastly appears to have gained traction with its modern platform. Still, the stock is insanely expensive, and I don’t think returns will be as good going forward.

Fortunately, Fastly isn’t the only player in the edge computing and security space. If I had to pick a stock today that plays into these same very real and important growth trends, I’d much rather buy one of Fastly’s peers.

Fastly is the newest content delivery network on the block, but CDNs are actually a well-established industry with a number of players. Akamai Technologies (NASDAQ:AKAM) is the largest-scale player in the space, and it has the scale to deliver big profits today — a scale that Fastly lacks — as well as the financial strength to invest in new capabilities for tomorrow. Better yet, despite its solid 32% gain year-to-date, the stock is available for quite a reasonable price, relatively speaking. 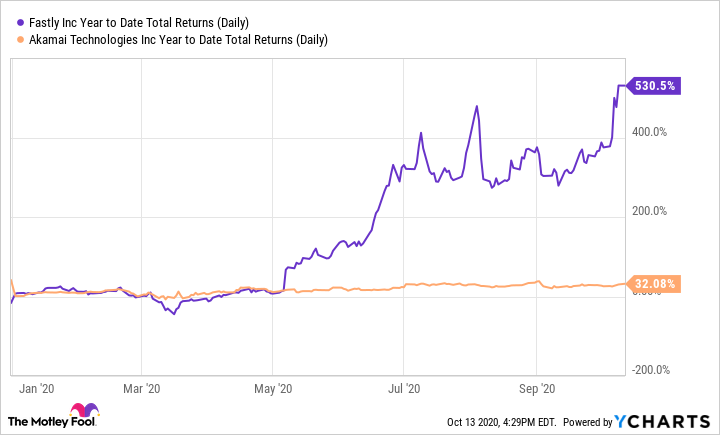 Keeping a perspective on the numbers

Qualitative measures around technology aside, let’s take a look at both companies’ recent numbers and valuations. The difference is striking:

Akamai is set to make over three times the profits that Fastly will make in revenue this year. One analyst recently predicted that Fastly’s revenue will grow by leaps and bounds, but only reach $544 million in calendar 2022. By then, Akamai will still be earning twice as much as Fastly makes in revenue. Yet Akamai’s market capitalization is only about $4 billion more, or 30% higher than Fastly’s.

It’s pretty remarkable that these two companies are valued so closely when Akamai has so much more in the way of revenue and profits.

How could this be true?

Of course, a truly disruptive solution from Fastly would grow at Akamai’s expense. Yet while Fastly is definitely growing faster than Akamai, it’s not as if Akamai’s business is declining.

As you can see above, Fastly is definitely growing at a much higher rate than Akamai; however, it’s not as if Akamai is in dire straits. Its revenue still grew at a double-digit rate, and profit growth soared as margins expanded.

The above indicates that Akamai’s slower growth results from its much bigger size, not just the fact that it’s losing customers left and right to Fastly. Thus, the massive valuation difference doesn’t seem justified.

During the second quarter, Fastly noted it had expanded its global capacity to 100 terabytes per second in 55 markets. Meanwhile, Akamai management said it had delivered over 100 TB/s every day of the second quarter in 135 countries all over the world.

While Fastly may have a modern platform, Akamai certainly appears to be holding its own, with all the financial resources necessary to compete going forward.

Fastly’s growth could also come at a price

It should also be noted that Akamai already has capabilities, especially in cybersecurity, that Fastly didn’t have until recently. Of course, Fastly is moving fast to gain these capabilities, having just acquired Signal Sciences for $825 million (including stock paid to Signal Sciences employees). The acquisition will consist of $200 million in cash and the rest in Fastly stock.

While Fastly is wisely using its high-priced stock to make an acquisition, it also had to use a fair amount of cash. Furthermore, Fastly is buying Signal at a massive premium of around 30 times Signal’s $28 million annualized sales run rate. That’s actually cheaper than Fastly, but certainly no bargain.

Fastly has a long way to go to catch up to Akamai, and doing so will also necessitate the investment of more capital, such as the Signal acquisition. Share dilution is a real expense for shareholders, and Fastly’s share count is set to rise in the wake of acquiring Signal.

Although the market is currently in love with newer high-growth stocks that could be the next big thing, many high-quality incumbents are actually trading at quite reasonable valuations. Akamai appears to be such an opportunity in the content delivery and edge computing space. It would definitely be my choice here in light of Fastly’s bubble-like valuation.