Advanced Micro Devices (NASDAQ:AMD) has turned itself into one of the tech industry’s more notable comeback stories. It has moved from near penny-stock status to as high as $94 per share within the last five years.

However, challenges remain as AMD moves to build on its recent success. Let’s look at where AMD has been and where it might go between now and 2025.

AMD over the last five years

Five years ago, most people did not see AMD becoming the investment it is today. The stock struggled to stay above the $2-per-share level, and with PCs in decline, it did not appear to have a reason to exist. 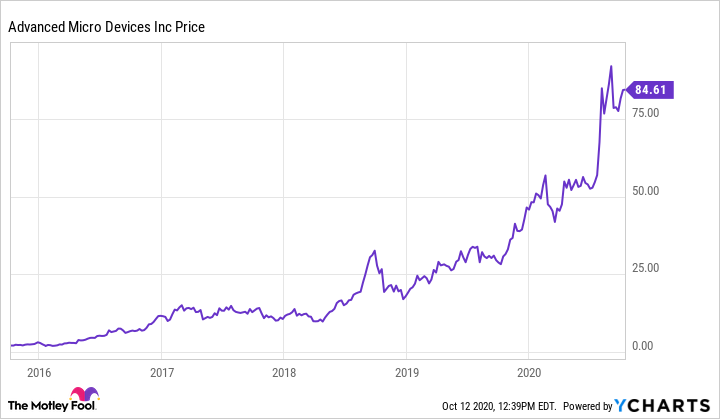 However, in 2014, AMD appointed Lisa Su as its new CEO. Under her leadership, the company set itself on course for a massive turnaround. Su diversified the company away from PC products. Gaming console chips, data centers, and virtual reality (VR) became increasingly important revenue drivers.

These moves put the tech industry giant in direct competition with NVIDIA and its graphics chips. AMD also made gains over longtime archrival Intel. As a result, AMD is marketing a 7nm (nanometer) chip. So far, Intel has struggled to bring such a chip to the market, and its delays have helped to lift AMD stock.

The next five years offer promise

AMD stock trades at a forward P/E ratio of about 50. While that may seem high, analysts predict about 72% earnings growth for this year and 51% in 2021. This makes AMD stock presumably worth its elevated multiple, at least for now.

The release of next-generation gaming consoles by Microsoft and Sony should help to bolster this growth. Its continued innovations in graphics processing units (GPUs) and central processing units (CPUs) should also help it remain competitive against NVIDIA and Intel. In many respects, AMD’s growth appears to be here to stay.

Despite AMD’s bright growth prospects, investors should be aware that NVIDIA has fought back against its challenges and has regained some of the market share it lost to AMD.

Countermoves could also become an issue in AMD’s battle with Intel. For all of Intel’s competitive problems, it remains the much larger chip producer. In the most recent quarter, AMD brought in just over $1.9 billion in revenue. Intel generated $19.7 billion over the same period. When Intel finally releases a 7nm chip, it could win back much of its business lost to AMD.

Also, as a fabless chip company (i.e. one that outsources fabrication), AMD depends on Taiwan Semiconductor for chip manufacturing. More recently, even Intel, which produced most of its own chips, has looked to outsourcing. Nonetheless, with TSMC’s multiple clients, AMD’s lack of control over production could become an unwelcome concern, especially if the much larger Intel competes with AMD for the same production resources.

Finally, investors must consider the future of Lisa Su. AMD owes its prosperity, and arguably its continued existence, to her leadership. Still, since earning her doctorate from MIT in 1994, she has changed companies periodically. Su has also worked at Texas Instruments, IBM, and Freescale Semiconductor over the course of her career. If she departs AMD unexpectedly, it could bring deep uncertainty or worse.

Nonetheless, as things stand now, AMD should remain one of the more significant beneficiaries as key industries such as gaming, virtual reality, and data centers stay on their growth trajectories. Earnings may not match the 50%-plus growth rates of today five years from now. Still, these increases should keep taking AMD stock higher.

Despite AMD’s potential, stockholders need to stay vigilant. NVIDIA has fought back, and Intel will likely do the same. Moreover, the lack of control over production and the future of CEO Su’s tenure remain potential threats to the AMD growth story.

However, these are merely potential threats, at least for now. Unless and until these perils become a reality, AMD should continue its march higher.